Followings are the characteristics for MCI patients.

Dementia is not the name for disease but a syndrome – usually of a chronic or progressive nature – in which there is deterioration in memory and cognitive function (i.e. the ability to process thought) beyond what might be expected from normal ageing. It affects memory, thinking, orientation, comprehension, calculation, learning capacity, language, and judgement. Dementia is caused by abnormal brain changes, and typical diseases causing Dementia are as follows;

Why does the memory lapse or memory loss increase ?

Function and Mechanism of Neuron 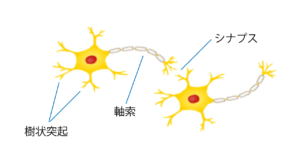 Axon, which is the long neurites, works to transfer the electric signal (stimulus) to other neuronal cells and sensory organs, and Dendrite, which is the short neurites, works to receive the electric signal (stimulus) coming from other neuronal cells, respectively. Thus, the axon and dendrite play such important roles in cognitive abilities.

Axon and dendrite develops as one grows. However, they start waning due to the influence of amyloid β and phosphorylated tau proteins at the late teens, followed by atrophy and/or diminish. As a result, cognitive impair- ment and memory dysfunction are caused. Thereafter, the frequency of memory lapse and/or memory loss are gradually increasing, resulting in finally causing such as Alzheimer type dementia.

Signs and Symptoms of Dementia

Dementia affects each person in a different way, depending upon the impact of the disease and the person’s personality before becoming ill. The signs and symptoms linked to dementia can be understood in three stages.

Early stage: the early stage of dementia is often overlooked, because the onset is gradual. Common symptoms include:

Middle stage: as dementia progresses to the middle stage, the signs and symptoms become clearer and more restricting. These include:

Late stage: the late stage of dementia is one of near total dependence and inactivity. Memory disturbances are serious and the physical signs and symptoms become more obvious. Symptoms include:

Followings are some cardinal symptoms for the early stage of dementia.

The symptoms of １and ２ are the most detectable cardinal ones in early stage of dementia. If more than two of the seven symptoms above were detected, MCI needs to be considered, although there are individual differences.

２）BPSD(Behavioral and Psychological Symptoms of Dementia)

BPSD(Behavioral and Psychological Symptoms of Dementia) is the symptoms coming out through interaction with neighbors. As BPSD is affected by condition of cardinal symptoms, character of corresponding person and his/her living environment, it is not always recognized in all patients of dementia.

Followings are the symptoms in BPSD.

There are no fundamental treatments or drugs available for the four diseases explained in the chapter of “What is dementia ?”, but it’s possible to delay the progress of Alzheimer’s disease and Lewy body dementia by taking the currently-approved anti-dementia drugs.

However, There are no treatments found yet for these diseases. In June 2018, the Ministry of Health of France announced to make rescission of the approval for the anti-dementia drugs currently used even in Japan, based on the poor usefulness due to the less effectiveness comparing to the adverse events.

Asahi(Japanese newspaper) 2018/6/23(The insufficient effect of the four anti-dementia drugs;  French Health Authority withdrew these 4 drugs from the NHI  list)

Even though the fundamental treatment methods for dementia is not available, Early diagnosis is of great importance not to miss the early stage symptoms. Because, there are cases where it is possible to alleviate the symptoms of dementia in case of taking appropriate treatments and/or counteractions in the early stage of dementia as quickly as possible.

Dr. Dale Predesen, the author and MD. of the recent best-seller book in US titled ” The End of Alzheimer’s(The First Programme to Prevent and Reverse the Cognitive Decline)” explained how to alleviate the symptoms of Alzheimer’s patients in this book, based on his long-term clinical experiences on the dementia patients as follows;

-1) What’s important to do at first is not only relying on prescribing medicines, but also to discover the factors affecting the symptoms of each Alzheimer’s patient through right diagnosis.

-2) Then, taking actions such as taking suitable foods and/or supplements, schedule control of food/supplement intake, suitable physical exercise, enough sleep and delete of stress, etc. in order to delete the corresponding factors or to improve the corresponding symptoms.

-3) Dr. Predesen has demonstrated through his long-term experiences with Alzheimer’s patients as MD. that the symptoms of Alzheimer’s can be alleviated by following the procedures described above in 1) and 2).

He also emphasized that drug therapy is not the main-dish but only a Dessert in the Alzheimer’s treatment, although he has given the drugs therapy to some Alzheimer’s patients if necessary.